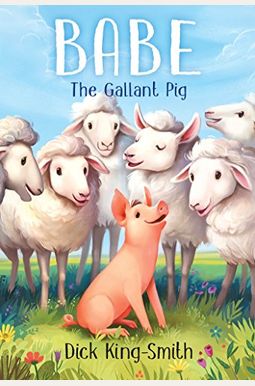 When Babe arrives at Hogget Farm, Mrs. Hogget's thoughts turn to sizzling bacon and juicy pork chops. But before long, Babe reveals a talent no one could have expected: he can handle Farmer Hogget's stubborn flock better than any sheepdog ever could When Farmer Hogget enters Babe in the Grand Challenge Sheepdog Trials, everyone, including his wife, thinks he is a fool. But he believes in Babe. Now it's just up to Babe to convince everyone else to believe in a sheep-pig An ALA Notable Book A Boston Globe-Horn Book Honor Book A Horn Book Fanfare Honor Book An IRA-CBC Children's Choice An NCTE Teachers' Choice

A hilarious fantasy about a plucky piglet that learns how to tend sheep, Babe is a barnyard charmer. --The Washington Post on the film adaptation

An animal fantasy which will inevitably be compared to Charlotte's Web. . . . A splendid book. --The Horn Book, starred review Impossible to resist. --Booklist, starred review One of the most delightful children's authors. --The Guardian on Dick King-Smith

0
|   0  reviews
Did you read Babe: The Gallant Pig? Please provide your feedback and rating to help other readers.
Write Review

List of All Editions of Babe: The Gallant Pig