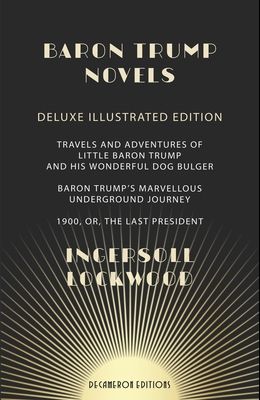 Lockwood published the first novel, Travels and Adventures of Little Baron Trump and His Wonderful Dog Bulger, in 1889, and its sequel, Baron Trump's Marvellous Underground Journey, in 1893. The novels recount the adventures of the German boy Wilhelm Heinrich Sebastian Von Troomp, who goes by Baron Trump, as he discovers weird underground civilizations, offends the natives, flees from his entanglements with local women, and repeats this pattern until arriving back home at Castle Trump.

The novels were part of a trend in U.S. children's literature that responded to the demand for fantastic adventure stories triggered by Lewis Carroll's Alice's Adventures in Wonderland (1865).

The third novel, 1900, or The Last President, is a dystopian work in which New York City is riven by protests following the shocking victory of a populist candidate in the 1896 presidential election, a candidate who brings on the downfall of the American republic.