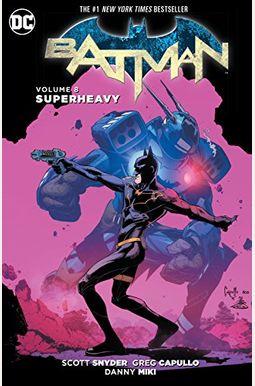 COMISIONER GORDON IS THE NEW BATMAN

Following the disappearance and presumed death of Batman, former police commissioner Jim Gordon has been called to carry on the Dark Knight's legacy and become the Dark Knight's successor. But while the name and what it stands for remain the same, this new Batman is far from just a copy of the original. Patrolling the city in a gargantuan high-tech Bat-suit, Gordon is no shadowy vigilante. He has the full cooperation of the G.C.P.D. and the Mayor, plus a multi-million dollar budget from Powers International. But will an expensive suit be enough to stop the mysterious, weed-like Mr. Bloom before his deadly plans for the city take root? The #1 New York Times all-star creative team of Scott Snyder, Greg Capullo and Danny Miki introduce an all-new Dark Knight in BATMAN VOL. 8: SUPERHEAVY, with guest appearances from Brian Azzarello (WONDER WOMAN) and Jock (BATMAN: THE BLACK MIROR). Collects BATMAN #41-45 and DC SNEAK PEAK: BATMAN #1.

5
|   7  reviews
Did you read Batman Vol. 8: Superheavy (the New 52)? Please provide your feedback and rating to help other readers.
Write Review
1

List of All Editions of Batman Vol. 8: Superheavy (the New 52)