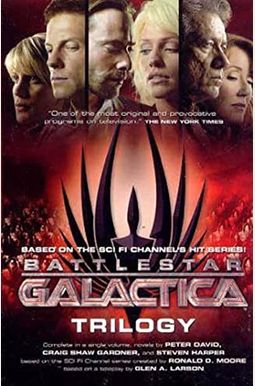 Battlestar Galactica, recognized as one of the most provocative, and socially relevant series of the new millennium, earned its status as a classic American drama series after its very first, Peabody Award-winning season. Here, for the first time in one volume, are all three original Battlestar Galactica novels--based on the highly-lauded TV series that took the country by storm.

Sagittarius Is Bleeding, by Peter David, concerns President Laura Roslin, whose prophetic dreams have infused her people with hope that they will find Earth, humanity's cradle. But her new dreams of a galaxy overrun by the Cylons disturb her even as they energize an extremist political group. The threat of violent revolt puts Roslin at personal risk and endangers the fleet.

In Unity by Steven Harper, Peter Attis, a rock star adored by all the fleet, including Starbuck, has recently been rescued from a Cylon prison ship. But after his first post-return concert, crewmembers are stricken by a strange malady that threatens to lay the fleet open to Cylon attack.

Books like Battlestar Galactica Trilogy: The Cylons' Secret/Sagittarius Is Bleeding/Unity

0
|   0  reviews
Did you read Battlestar Galactica Trilogy: The Cylons' Secret/Sagittarius Is Bleeding/Unity? Please provide your feedback and rating to help other readers.
Write Review

List of All Editions of Battlestar Galactica Trilogy: The Cylons' Secret/Sagittarius Is Bleeding/Unity