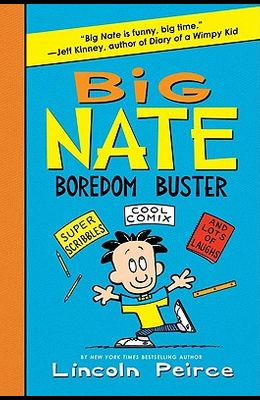 Soon to be an animated series from Nickelodeon

For fans of the hilarious Diary of a Wimpy Kid series, here comes the eighth novel in the New York Times bestselling series Big Nate.

BIG NATE IS BLASTING OF

Nate has a crush on Ruby. But after his scrap with Randy Betancourt makes headlines in the Weekly Bugle, he's got a problem WAY worse than detention Can Nate bounce back? And will the annual Mud Bowl be a blast . . . or a bust?

Nate may not be Joe Honor Roll, but he knows he's meant for big fun. He's always up for scribbling games, jokes, laughs, and creating comics. And now you can join him

There is plenty of space for kids to get creative, and all the favorite characters from Nate's New York Times bestselling world are included--the know-it-all Gina; Nate's best buddies, Francis and Teddy; his rival, Artur; and his least favorite teacher, Mrs. Godfrey, aka Godzilla. Nate's world pops off the pages with more than 500 black-and-white illustrations that you get to help create.

An awesome way to guarantee 100% relief from boredom--learn to doodle, draw, and write the Big Nate way

0
|   0  reviews
Did you read Big Nate Boredom Buster? Please provide your feedback and rating to help other readers.
Write Review

List of All Editions of Big Nate Boredom Buster