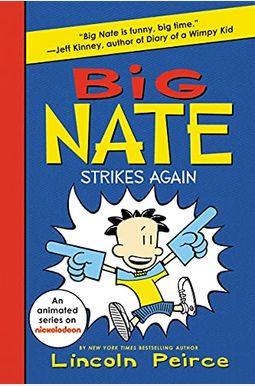 Soon to be an animated series from Nickelodeon

BIG NATE will surpass all others

But it won't be easy. He's stuck with Gina, his all-time enemy, in a class project for his least favorite teacher Mrs. Godfrey, aka Godzilla. To make matters worse, Gina ALSO ends up on his fleeceball team, right when Nate is set to win his first fleeceball championship ever. This is his moment for glory, but Gina's sure to steal his thunder, or ruin everything.

Meet BIG NATE, self-described genius and definitely NOT the teacher's pet in this comic-strip novel perfect for anyone who's ever been to middle school.

4
|   8  reviews
Did you read Big Nate Strikes Again? Please provide your feedback and rating to help other readers.
Write Review
1

List of All Editions of Big Nate Strikes Again