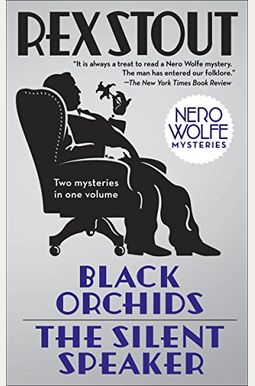 A NERO WOLFE SPECIAL EDITION--TWO COMPLETE MYSTERIES IN ONE VOLUME

Nero Wolfe towers over his rivals.he is an exceptional character creation. --New Yorker A grand master of the form, Rex Stout is one of America's greatest mystery writers, and his literary creation Nero Wolfe is one of fiction's greatest detectives. In this double helping of classic Nero Wolfe mysteries, Stout presents the arrogant, gourmandizing, sedentary sleuth and his trusty man-about-town, Archie Goodwin, with a pair of delectable murders that no connoisseur of the whodunit could possibly resist. BLACK ORCHIDS
Not much can get Wolfe to leave his comfortable brownstone, but the showing of a rare black orchid lures him to a flower show. Unfortunately, the much-anticipated event is soon overshadowed by a murder as daring as it is sudden. It's a case of weeding out a cunning killer who can turn up anywhere--and Wolfe must do it quickly. Because a second case awaits his urgent attention: a society widow on a mailing list of poison-pen letters leading to a plot as dark as any orchid Wolfe has ever encountered. THE SILENT SPEAKER
When a government power broker scheduled to speak before an influential group of millionaires turns up dead, Nero Wolfe grudgingly takes the case--even as his own financial affairs teeter toward ruin. Soon a second victim is discovered, a missing stenographer's tape causes a panic, and a dead man speaks, after a fashion. As the business world demands answers, the great detective baits a trap to net a killer worth his weight in gold.