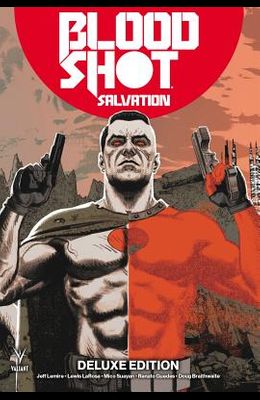 Today: Ray Garrison and his true love, Magic, thought they had left their days of tumult and violence behind them as they raise their newborn daughter, Jessie, in the quiet isolation of the countryside. Until Magic's father - the depraved cultist simply named Daddy - seeks to bring his wayward progeny back into his flock by any means necessary. Now, torn between the family that loves him and the rage within, the walking weapon of war once called Bloodshot is about to give in to revenge. Meanwhile: In the near future, can Magic and the now-adolescent Jessie outmaneuver the nanite-infused killer called Rampage long enough to answer the question that has haunted them for years. Whatever happened to the man they both loved? Whatever happened to Bloodshot? Collecting BLODSHOT SALVATION #1-12, along with more than 20 pages of rarely seen art and extras

0
|   0  reviews
Did you read Bloodshot Salvation Deluxe Edition? Please provide your feedback and rating to help other readers.
Write Review

List of All Editions of Bloodshot Salvation Deluxe Edition