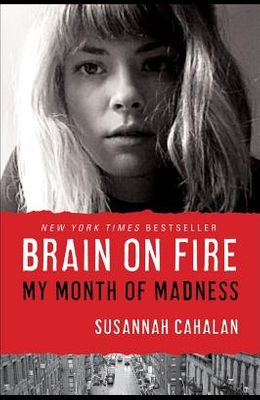 Brain on Fire: My Month of Madness

One day, Susannah Cahalan woke up in a strange hospital room, strapped to her bed, under guard, and unable to move or speak. Her medical records--from a month-long hospital stay of which she had no memory--showed psychosis, violence, and dangerous instability. Yet, only weeks earlier she had been a healthy, ambitious twenty-four-year-old, six months into her first serious relationship and a sparkling career as a cub reporter.

Susannah's astonishing memoir chronicles the swift path of her illness and the lucky, last-minute intervention led by one of the few doctors capable of saving her life. As weeks ticked by and Susannah moved inexplicably from violence to catatonia, $1 million worth of blood tests and brain scans revealed nothing. The exhausted doctors were ready to commit her to the psychiatric ward, in effect condemning her to a lifetime of institutions, or death, until Dr. Souhel Najjar--nicknamed Dr. House--joined her team. He asked Susannah to draw one simple sketch, which became key to diagnosing her with a newly discovered autoimmune disease in which her body was attacking her brain, an illness now thought to be the cause of demonic possessions throughout history.

With sharp reporting drawn from hospital records, scientific research, and interviews with doctors and family, Brain on Fire is a crackling mystery and an unflinching, gripping personal story that marks the debut of an extraordinary writer.

Frequently Asked Questions About Brain on Fire: My Month of Madness

Books like Brain on Fire: My Month of Madness

0
|   0  reviews
Did you read Brain on Fire: My Month of Madness? Please provide your feedback and rating to help other readers.
Write Review

List of All Editions of Brain on Fire: My Month of Madness