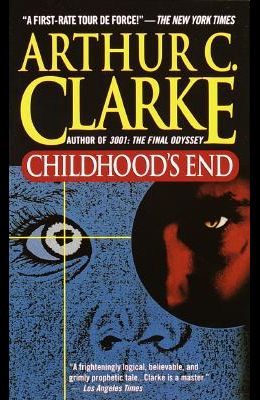 Soon to be a Syfy miniseries event

Childhood's End is one of the defining legacies of Arthur C. Clarke, the author of 2001: A Space Odyssey and many other groundbreaking works. Since its publication in 1953, this prescient novel about first contact gone wrong has come to be regarded not only as a science fiction classic but as a literary thriller of the highest order. Spaceships have suddenly appeared in the skies above every city on the planet. Inside is an intellectually, technologically, and militarily superior alien race known as the Overlords. At first, their demands seem benevolent: unify Earth, eliminate poverty, end war. But at what cost? To those who resist, it's clear that the Overlords have an agenda of their own. Has their arrival marked the end of humankind . . . or the beginning? Praise for Childhood's End

A first-rate tour de force.--The New York Times Frighteningly logical, believable, and grimly prophetic . . . Clarke is a master.--Los Angeles Times There has been nothing like it for years; partly for the actual invention, but partly because here we meet a modern author who understands that there may be things that have a higher claim on humanity than its own 'survival.' --C. S. Lewis As a science fiction writer, Clarke has all the essentials.--Jeremy Bernstein, The New Yorker From the Paperback edition.

0
|   0  reviews
Did you read Childhood's End? Please provide your feedback and rating to help other readers.
Write Review