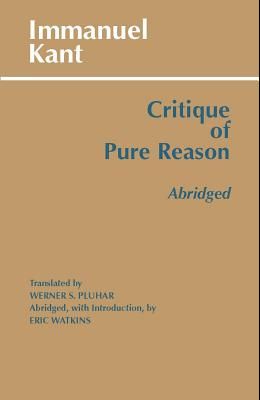 With The Critique of Pure Reason Kant laid a new foundation for speculative thought in the western world. He inquired into the nature of reason. He vindicated the reasonableness of some truths which men had indeed felt to be indefeasibly true, but which they had not been able to establish by reasoning.

Kant sought to make a clear separation between the provinces of belief and knowledge. In his view, this is the essence of a critical philosophy. It distinguishes between the perception of that which is in accordance with natural law and the understanding of the moral meaning of things.

He had said that the primary condition, fundamental not merely to knowledge, but to all connected experience, is the knowing, experiencing, thinking, acting self. It is that which says 'I, ' the ego, the permanent subject. But that is not enough. The knowing self demands in turn a knowable world. It must have something outside of itself to which it yet stands related, the object of knowledge. Knowledge is the combination of those two, the result of their cooperation.

Kant proposed that we may indeed say that we know an object of belief. Yet we must make clear to ourselves that we know it in a different sense from that in which we know physical fact. Faith, since it does not spring from the pure reason, cannot be demonstrated by the reason. Equally it cannot, as skepticism has declared, be overthrown by the pure reason.

List of All Editions of Critique of Pure Reason, Abridged (Hackett Publishing Co.)