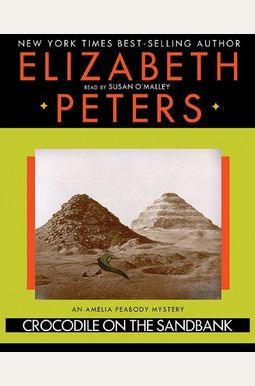 Crocodile On The Sandbank

If Indiana Jones were female, a wife, and a mother who lived in Victorian times, he would be Amelia Peabody Emerson.-Publishers Weekly

Amelia Peabody, that indomitable product of the Victorian age, embarks on her debut Egyptian adventure armed with unshakable self-confidence, a journal to record her thoughts, and, of course, a sturdy umbrella. On her way to Cairo, Amelia rescues young Evelyn Barton-Forbes, who has been abandoned by her scoundrel lover. Together the two women sail up the Nile to an archeological site run by the Emerson brothers-the irascible but dashing Radcliffe and the amiable Walter. Soon their little party is increased by one-one mummy that is, and a singularly lively example of the species. Strange visitations, suspicious accidents, and a botched kidnapping convince Amelia that there is a plot afoot to harm Evelyn. Now Amelia finds herself up against an unknown enemy-and perilous forces that threaten to make her first Egyptian trip also her last . . . Praise for Elizabeth Peters and Crocodile on the Sandbank
A writer so popular that the public library has to keep her books under lock and key. -Washington Post Book World Grand views of Egyptian antiquities . . . a sparkling series.
-Marilyn Stasio, New York Times Book Review

Frequently Asked Questions About Crocodile On The Sandbank

0
|   0  reviews
Did you read Crocodile On The Sandbank? Please provide your feedback and rating to help other readers.
Write Review

List of All Editions of Crocodile On The Sandbank