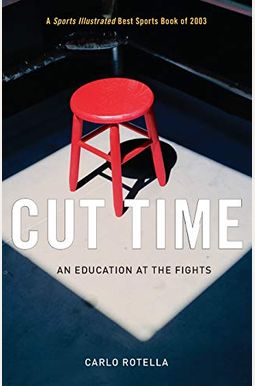 Cut Time: An Education At The Fights

Boxing is not just fighting, writes Carlo Rotella. It is also training and living right and preparing to go the distance in the broadest sense of the phrase, a relentless managing of self that anyone who gets truly old must learn. Rotella's Cut Time chronicles his immersion in the fight world, from the brutal classroom of the gym to the spectacle of fight night. An award-winning writer and ringside veteran, Rotella unearths the hidden wisdom in any kind of fight, from barroom brawl to HBO extravaganza.

Tracing the consequences of hurt and craft, the two central facts of boxing, Rotella reveals moving resonances between the worlds inside and outside the ropes. The brief, disastrous fistic career of one of his students pinpoints the moment when adulthood arrives; the hard-won insight of a fellow fan shows Rotella how to reckon with a car crash. Mismatches, resilience, pride, pain, and aging--Rotella's lessons from the ring extend far beyond the sport. In Cut Time, Rotella achieves the near-impossible: he makes the fight world relevant to us, whether we're fans or not. Cut Time should be read not just by fight aficionados but also by fans of intelligent nonfiction writing. . . . An absorbing read.--Sports Illustrated
Just when you think it's all been written, a good writer takes a shining new look at an old subject and breathes life into it. . . . Rotella has preserved the blow-by-blow and the grandeur of another age but has somehow expanded the ring to include his own generation's proclivities and sensibility.--Los Angeles Times

Frequently Asked Questions About Cut Time: An Education At The Fights

Books like Cut Time: An Education At The Fights

0
|   0  reviews
Did you read Cut Time: An Education At The Fights? Please provide your feedback and rating to help other readers.
Write Review

List of All Editions of Cut Time: An Education At The Fights