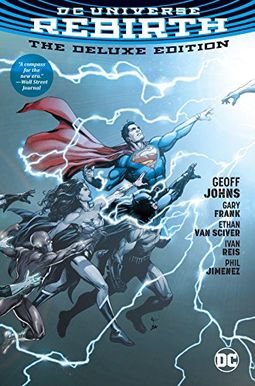 DC Universe: Rebirth didn't just connect the comic book universe of Superman, Batman and Wonder Woman with the dystopian world of Alan Moore and Dave Gibbons' Watchmen -- it did so in a way that subtly echoed the 1986 comic book classic. --Hollywood Reporter

The world of the Watchmen collides with the DC Universe in the most shocking story in DC history DC Universe: Rebirth Deluxe Edition heralds in a new era in storytelling and sets the stage for the future of the DC Universe.

Wally West is trapped out of time and space, lost in the recesses of dimensional bleed due to the Flashpoint caused by his mentor, Barry Allen. Drifting in this nothingness, only Wally--the man once known as Kid Flash and then the Flash--can see the mystery pervading the universe. Who has stolen 10 years? Wally must now return to Earth and the loved ones who have always acted as his lightning rod, but no matter who he contacts, he slips further and further away, closer to nothingness. The fate of the universe depends on Wally West's REBIRTH. The story that began one of the most critically acclaimed launches of all time is here in DC Universe: Rebirth Deluxe Edition. Written by #1 New York Times best-selling author Geoff Johns (Justice League) with art from four of the industry's greatest talents in Ivan Reis (Aquaman), Gary Frank (Batman: Earth One), Ethan Van Sciver (Green Lantern: Rebirth) and Phil Jimenez (Infinite Crisis), this new hardcover edition features a story with ramifications that will reverberate through the DC Universe for years to come

5
|   9  reviews
Did you read Dc Universe: Rebirth? Please provide your feedback and rating to help other readers.
Write Review
1