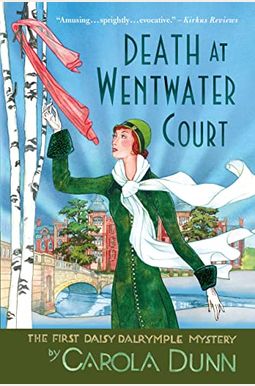 More than twenty years ago, Carola Dunn introduced to the world the charming, vivacious and perspicacious Daisy Dalrymple and the tumultuous decade of the 1920s, in an England barely starting to recover from World War I and now undergoing rapid social changes.

In early 1923, the young Honourable Daisy Dalrymple has made a decision that shocks her social class-instead of living in the Dower House with her mother and being supported by her relatives, she's decided to make her own living as a writer. Landing an assignment for Town & Country to write a series of articles on country manor houses, Daisy travels to Wentwater Court to research her first piece. There she finds a household in turmoil, filled with holiday guests and recriminations. But that's nothing compared to the uproar when one of those guests drowns in a tragic early-morning skating accident. When it is learned that this was anything but accidental, Scotland Yard is called in and a young Chief Inspector, one Alec Fletcher, is called in to investigate. And therein hangs a tale. A series with all the charm of the classic golden age mysteries with the kind of full-blooded, three dimensional characters that define the best of modern mystery, the Daisy Dalrymple mysteries have been a favorite for more than two decades. Now, with this reissue, readers can enjoy it from the very beginning.

Books like Death At Wentwater Court (Daisy Dalrymple Mysteries, No. 1)

0
|   0  reviews
Did you read Death At Wentwater Court (Daisy Dalrymple Mysteries, No. 1)? Please provide your feedback and rating to help other readers.
Write Review

List of All Editions of Death At Wentwater Court (Daisy Dalrymple Mysteries, No. 1)