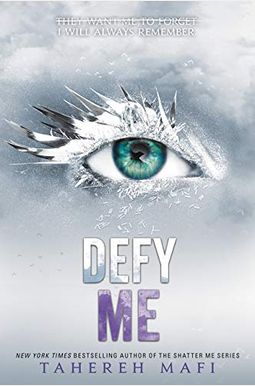 Book #5 in the Shatter Me Series
by
Tahereh Mafi
$12.99
Select Format

I'm adrift, suspended in a pool of senselessness, currents pushing me to the surface of something--an emotional revelation--that trembles into existence only to evaporate, seconds later, as if it might be terrified to exist.

and I'm tossed back out to sea.

Juliette Ferrars isn't who she thinks she is.

Be a weapon. Or be a warrior.

This time, she's not alone. Stronger, braver, and more resilient than ever, Juliette will fight for life and love with her friends by her side--but first, she has to survive the war being waged against her mind:

She has to remember who she was.

Frequently Asked Questions About Defy Me

5
|   10  reviews
Did you read Defy Me? Please provide your feedback and rating to help other readers.
Write Review
1