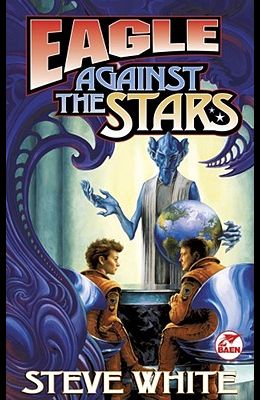 Eagle Against the Stars

Part of the The Stars Series
by
Steve White
$8.86
Select Format

THE ALIENS PLAYED BY THE RULES. THEIR RULES.

When the Lokaron suddenly appeared in the skies of Earth, America was enjoying victory in the off-and-on war that had occupied most of the 20th century. That's why they chose America to occupy and use as their puppet in dominating the planet. We were already set up to do it, now we would do it for them.

Not that they were evil; they just insisted that we trade with them. By their rules, rules backed up by irresistible weapons. In terms of those rules, they would even play fair -- but in the long run, if they didn't own something, it would be because they didn't want it.

At first we tried to fight, but just as the Japanese, the Chinese, the Hindus and all the rest had learned, when the ones with the guns say Let's trade! they really mean Trade or bleed. And so you trade -- even if you won't have a country -- or a planet -- left when the last round is played out.

But worms turn, and just as had the Europeans a century ago, the Lokaron were going to learn a lesson from their victims, a lesson that they weren't going to like one bit.

Frequently Asked Questions About Eagle Against the Stars

The Stars Series In Order - By Steve White

0
|   0  reviews
Did you read Eagle Against the Stars? Please provide your feedback and rating to help other readers.
Write Review

List of All Editions of Eagle Against the Stars