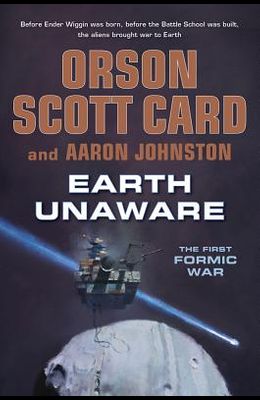 Book #1 in the The First Formic War Series
by
Scott Brick and Aaron Johnston
$3.88
Select Format

A hundred years before Orson Scott Card's Ender's Game, humans thought they were alone in the galaxy. Humanity was slowly making their way out from Earth to the planets and asteroids of the Solar System, exploring and mining and founding colonies.

The mining ship El Cavador is far out from Earth, in the deeps of the Kuiper Belt, beyond Pluto. Other mining ships, and the families that live on them, are few and far between this far out. So when El Cavador's telescopes pick up a fast-moving object coming in-system, it's hard to know what to make of it. It's massive and moving at a significant fraction of the speed of light.

But the ship has other problems. Their systems are old and failing. The family is getting too big. There are claim-jumping corporates bringing Asteroid Belt tactics to the Kuiper Belt. Worrying about a distant object that might or might not be an alien ship seems.not important.

They're wrong. It's the most important thing that has happened to the human race in a million years. This is humanity's first contact with an alien race. The First Formic War is about to begin.
Earth Unaware is the first novel in The First Formic War series by Orson Scott Card and Aaron Johnston.

The First Formic War Series In Order - By Scott Brick

0
|   0  reviews
Did you read Earth Unaware (The First Formic War)? Please provide your feedback and rating to help other readers.
Write Review

List of All Editions of Earth Unaware (The First Formic War)