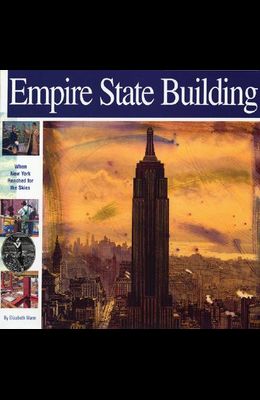 Part of the Wonders of the World Series
by
Elizabeth Mann and Alan Witschonke and Lewis Hine
$3.88
Select Format

The illustrated true story of the world's most famous skyscraper.

In 1929 the race was on to construct the tallest building in the world. Less than two years later, the race was won and the age of skyscrapers had its exclamation point.

In Empire State Building, author Elizabeth Mann tells the story of an American icon. From start to finishing touches, she tracks the wonders of architecture, engineering, and construction that went into its creation. Her fascinating profiles of the millionaires and laborers capture the essence of the individuals who dreamed of and built this architectural marvel.

Alan Witschonke's paintings are bold and luminous, and his diagrams dazzlingly clear. Photographs by early 20th century master Lewis Hine take the reader up high into the heady, dangerous world of the steelworker out on the edge of girders way above the city streets. Empire State Building is a timely book about the enduring achievement of a great city.

Wonders of the World series

The winner of numerous awards, this series is renowned for Elizabeth Mann's ability to convey adventure and excitement while revealing technical information in engaging and easily understood language. The illustrations are lavishly realistic and accurate in detail but do not ignore the human element. Outstanding in the genre, these books are sure to bring even the most indifferent young reader into the worlds of history, geography, and architecture.

One of the ten best non-fiction series for young readers.
- Booklist

Wonders of the World Series In Order - By Elizabeth Mann

0
|   0  reviews
Did you read Empire State Building? Please provide your feedback and rating to help other readers.
Write Review