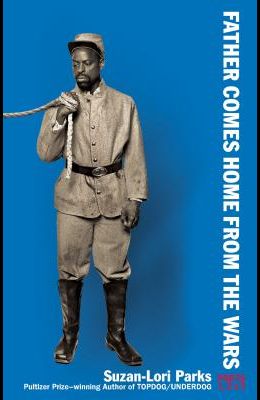 The finest work yet from this gifted writer.--The New York Times

Offered his freedom if he joins his master in the ranks of the Confederacy, Hero, a slave, must choose whether to leave the woman and people he loves for what may be another empty promise. As his decision brings him face to face with a nation at war with itself, the ones Hero left behind debate whether to escape or wait for his return, only to discover that for Hero, freedom may have come at a great spiritual cost. A devastatingly beautiful dramatic work, Father Comes Home from the Wars (Parts 1, 2, & 3) is the opening trilogy of a projected nine-play cycle that will ultimately take us into the present.

Suzan-Lori Parks became the first African American woman to receive the Pulitzer Prize for Drama for her play Topdog/Underdog in 2002. Her other plays include The Book of Grace, In the Blood, Venus, The Death of the Last Black Man in the Whole Entire World, Fucking A, Imperceptible Mutabilities in the Third Kingdom and The America Play. In 2007 her 365 Days/365 Plays was produced at more than seven hundred theaters worldwide. Parks is a MacArthur Fellow and the Master Writer Chair at the Public Theater.

0
|   0  reviews
Did you read Father Comes Home from the Wars (Parts 1, 2 & 3)? Please provide your feedback and rating to help other readers.
Write Review