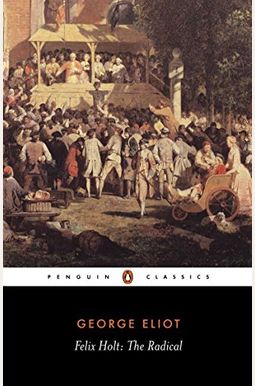 When William Blackwood, George Eliot's publisher, first saw the manuscript of Felix Holt in 1866 he could not contain his enthusiasm; in a letter to a friend he described the novel as a perfect marvel. The time is 1832 just after the passing of the Reform Bill, and surely such a.series of pictures of English Life, manners, and conversation never was drawn. You see and hear the people speaking. Every individual character stands out a distinct figure.

A political radical and a child of the working class, Felix has lost faith in a political system in which candidates never represent the interests of the working class. Harold Transome, the cynical son of wealthy Tory landowners, embraces radical politics for very different reasons. Both Harold and Felix vie for the affections of Esther Lyon, and she must weigh her feelings for them with the social and material goals she has set for herself. Their personal drama unfolds against the broad canvas of social and political upheaval of 1830s England.

This edition is based on the text of the first edition of the novel published in three volumes in 1866, and includes a full introduction, a wide range of appendices including reviews, as well as Eliot's Address to Working Men, by Felix Holt; The Legal Plot of Felix Holt; and a chronology of Eliot's life and career.

0
|   0  reviews
Did you read Felix Holt, The Radical? Please provide your feedback and rating to help other readers.
Write Review

List of All Editions of Felix Holt, The Radical