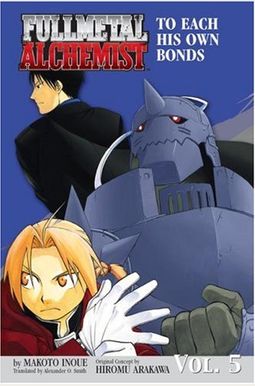 In an alchemical ritual gone wrong, Edward Elric lost his arm and his leg, and his brother Alphonse became nothing but a soul in a suit of armor. Equipped with mechanical auto-mail limbs, Edward becomes a state alchemist, seeking the one thing that can restore his and his brother's bodies.the legendary Philosopher's Stone. Contains volumes 13, 14 and 15 of Fullmetal Alchemist In the midst of heated battle, Ed, Envy and Prince Lin of Xing are swallowed whole by the homunculus Gluttony. When they finally escape, they find themselves face-to-face with the father of the homunculi, who offers Lin immortality as the new Greed. Meanwhile, Colonel Mustang learns the military's corruption goes all the way to the top, and the truth of what really happened in the Ishbalan War is revealed. Reads R to L (Japanese Style) for teen audiences.

Books like Fullmetal Alchemist, Vol. 5: The Ties That Bind

0
|   0  reviews
Did you read Fullmetal Alchemist, Vol. 5: The Ties That Bind? Please provide your feedback and rating to help other readers.
Write Review

List of All Editions of Fullmetal Alchemist, Vol. 5: The Ties That Bind