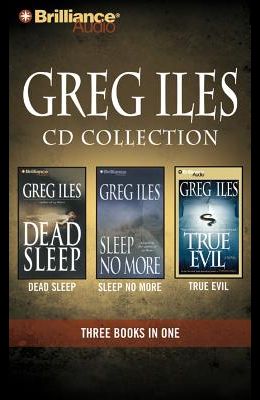 Dead Sleep
Jordan Glass wanders into a Hong Kong art museum and is puzzled to find fellow patrons eying her with curiosity. Minutes later, she stumbles upon a gallery containing a one-artist exhibition called The Sleeping Women. Collectors have come to believe that the canvases depict female nudes not in sleep but in death. When Jordan approaches the last work in the series, she freezes. The face in the painting seems to be her own. In fact, the face in the painting belongs to her murdered twin sister.

Sleep No More
John Waters is a husband and father happy with his lot in life, though he has not always felt that way. Years earlier he escaped an obsessive love affair, which he feared might consume him. The woman in question disappeared after Waters married, and later he heard that she was killed in New Orleans. But now, Waters has an uneasy feeling that she has resurfaced to trouble him--and entice him--once again.

True Evil
Dr. Chris Shepard is thirty-six years old, newly married, and well on his way to a perfect life. Or so he believes. But that future is forever cast into doubt the day Special Agent Alexandra Morse walks into his office and drops a bombshell: Dr. Shepard's beautiful new wife is plotting his murder. Chris agrees to act as bait to help Agent Morse unravel a divorce lawyer's scheme, which may already have cost nine unsuspecting spouses their lives.

List of All Editions of Greg Iles Collection: Dead Sleep/Sleep No More/True Evil