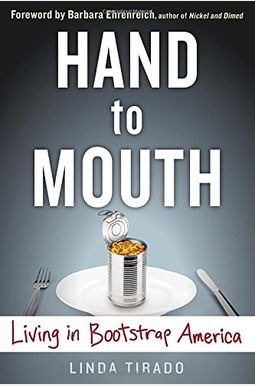 The real-life Nickel and Dimed--the author of the wildly popular Poverty Thoughts essay tells what it's like to be working poor in America. ONE OF THE FIVE MOST IMPORTANT BOKS OF THE YEAR--Esquire

DEVASTATINGLY SMART AND FUNY. I am the author of Nickel and Dimed, which tells the story of my own brief attempt, as a semi-undercover journalist, to survive on low-wage retail and service jobs. TIRADO IS THE REAL THING.--Barbara Ehrenreich, from the Foreword

As the haves and have-nots grow more separate and unequal in America, the working poor don't get heard from much. Now they have a voice--and it's forthright, funny, and just a little bit furious.

Here, Linda Tirado tells what it's like, day after day, to work, eat, shop, raise kids, and keep a roof over your head without enough money. She also answers questions often asked about those who live on or near minimum wage: Why don't they get better jobs? Why don't they make better choices? Why do they smoke cigarettes and have ugly lawns? Why don't they borrow from their parents? Enlightening and entertaining, Hand to Mouth opens up a new and much-needed dialogue between the people who just don't have it and the people who just don't get it.

Books like Hand to Mouth: Living in Bootstrap America

0
|   0  reviews
Did you read Hand to Mouth: Living in Bootstrap America? Please provide your feedback and rating to help other readers.
Write Review

List of All Editions of Hand to Mouth: Living in Bootstrap America