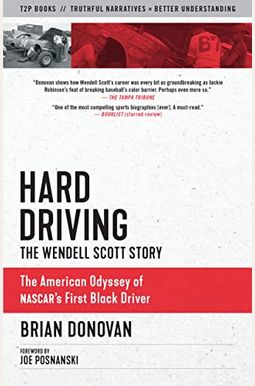 Hard Driving is the dramatic story of one man's dogged determination to live the life he loved, and to compete, despite daunting obstacles, at the highest level of his sport.

Wendell Scott figured he was signing up for trouble when he became NASCAR's version of Jackie Robinson in the segregated 1950s. Some speedways refused to let him race. Go home, nigger, spectators yelled. And after a bigoted promoter refused to pay him, Scott appealed directly to the sport's founder, nascar czar Bill France Sr. France made a promise Scott would never forget - that NASCAR would never treat him with prejudice.

For the next two decades, Scott chased a dream whose fulfillment depended on France backing up that promise. Persevering through crashes, health problems, and money troubles, Scott remained convinced he had the talent to become one of NASCAR's best. Hard Driving documents a previously untold chapter in the history of integration, politics, and sports in America. It reveals how France, founder of the multibillion-dollar nascar empire, reneged on his pledge and allowed repeated discrimination against Scott by racing officials and other powerful figures. It details France's alliances with leading segregationist politicians such as George Wallace, the reluctance of auto executives such as Lee Iacocca to sponsor a black driver; and the inspiring support Scott received from white drivers such as nascar champions Ned Jarrett and Richard Petty, who admired his skill and tenacity.

0
|   0  reviews
Did you read Hard Driving: The Wendell Scott Story? Please provide your feedback and rating to help other readers.
Write Review

List of All Editions of Hard Driving: The Wendell Scott Story