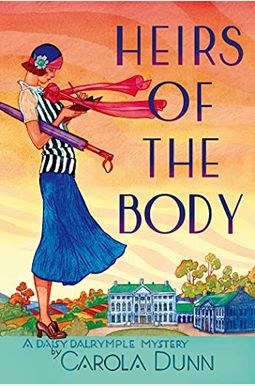 The Daisy Dalrymple series continues in Heirs of the Body--when one of four potential claimants to the title of Lord Dalrymple dies a sudden, nasty death, the question on everyone's mind is, was it murder?

In the late 1920's in England, The Honourable Daisy Dalrymple Fletcher is recruited to help her cousin Edgar--i.e. the Lord Dalrymple. About to turn fifty, Lord Dalrymple decides it is time to find out who would be the heir to the viscountcy. With the help of the family lawyer, who advertises Empire-wide, they have come up with four potential claimants. For his fiftieth birthday, Edgar invites those would-be heirs--along with Daisy and the rest of the family--to Fairacres, the family estate. In the meantime, Daisy is asked to be the family's representative at the lawyer's interviews with the claimants. Those four are a hotelier from Scarborough, a diamond merchant from South Africa, a young mixed-raced boy from Trinidad, and a sailor from Jamaica. However, according to his very pregnant wife, the sailor has gone missing. Daisy and Alec must uncover a conspiracy if they are going to stop the killing in the latest from the accomplished master of the genre, Carola Dunn.