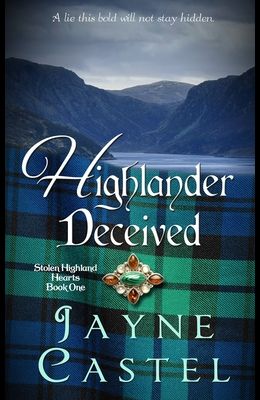 A lie this bold will not stay hidden. He thought he was marrying a chieftain's daughter-but his young wife isn't who she seems. Deception and passion collide in Medieval Scotland.

When Keira Gunn agrees to swap places with her best friend, and wed a man in her stead, she knows life is about to get complicated.

She's also risking her own future.

But Keira never wanted to be a nun, and longs for a life outside the nunnery where she's about to take her vows. Her friend is desperate-and this could be Keira's only chance to forge a new path for herself.

The Mackays of Farr have a new chieftain. Connor Mackay is a reluctant husband, yet he's been betrothed for years.

Now he needs to honor his promise.

The woman he collects from the nunnery is a surprise. She isn't the great beauty Connor expects, yet her quick wit and passionate nature soon enthrall him.

But his bride keeps a secret that risks more than both their hearts.

Steamy, emotional, and steeped in Scottish history, Jayne Castel's new series set around the lives and loves of three Mackay siblings will steal your heart.

0
|   0  reviews
Did you read Highlander Deceived: A Medieval Scottish Romance? Please provide your feedback and rating to help other readers.
Write Review

List of All Editions of Highlander Deceived: A Medieval Scottish Romance