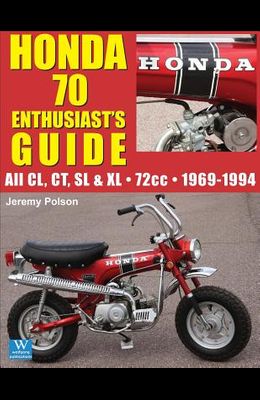 Author of Honda Mini Trail: Enthusiast's Guide, Jeremy Polson has put together another vintage Honda guide. It covers the third-best-selling Honda in American Honda history, the long-running Mini Trail CT-70, along with the CL, SL, and XL 72-cc motorcycles manufactured from 1969 to 1994. Polson begins with a brief introduction of the models that led to the first CL-70, and then jumps into a thorough analysis of the many models and iterations that Honda offered through the years.

With more than 25 years of experience collecting, restoring, and selling more than 200 small-displacement Hondas, Polson is the ideal author for this must-have look at a group of Honda's most popular motorcycles.

Despite the worldwide popularity of American Honda's 72-cc motorcycles, no other book on these models has been published, and the accuracy of information found on the Internet is suspect at best. It could be called the Bible for Honda 72-cc collectors and enthusiasts, because this book presents facts and figures backed up by production dates, serial numbers, and dealer information found nowhere else.

In addition to the hard facts, this book is filled with many rare photos that track the evolution of Honda's 72-cc motorcycles and unravels their mystery. Rare models covered include the first CT-70 Silver Tags with more than 30 features not found on the majority of later-model CT-70s, as well as many other low-production 72-cc motorcycles.

0
|   0  reviews
Did you read Honda 70: Enthusiast's Guide? Please provide your feedback and rating to help other readers.
Write Review