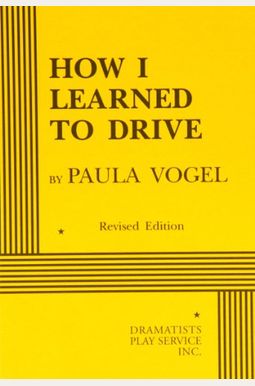 How I Learned To Drive

The play is steeped in a gentle lyricism we associate with nostalgic portraits of American youth. The tone, the setting, the characters seem at first so familiar, so, well, normal, that it's only by degrees that we sense the poison within the pastels. By then we feel both locked into, and complicit with, this portrait of a warping relationship. That's the art of Drive.--Ben Brantley, The New York Times

Paula Vogel's widely celebrated masterpiece, How I Learned to Drive, winner of the 1998 Pulitzer Prize for Drama and many other accolades, is published here for the first time as a stand-alone edition. Following a disjointed timeline of the twisted dynamics between Uncle Peck and his young niece L'il Bit, the story unfolds through her perspective, detailing the murky transformation she underwent. Known for its dark subject matter, the work demonstrates the result of child abuse on identity and the discovery of strength through trauma.

Paula Vogel's play, How I Learned to Drive, received the 1998 Pulitzer Prize for Drama, the Lortel Prize, Drama Desk, Outer Critics Circle and New York Drama Critics Awards for Best Play, as well as winning her second Obie. Other plays include The Baltimore Waltz, Desdemona, And Baby Makes Seven, The Long Christmas Ride Home, A Civil War Christmas, and Don Juan Comes Home from Iraq. She also has a distinguished career as a teacher and mentor to younger playwrights, first at Brown University and most recently at the Yale School of Drama.

Frequently Asked Questions About How I Learned To Drive

0
|   0  reviews
Did you read How I Learned To Drive? Please provide your feedback and rating to help other readers.
Write Review

List of All Editions of How I Learned To Drive