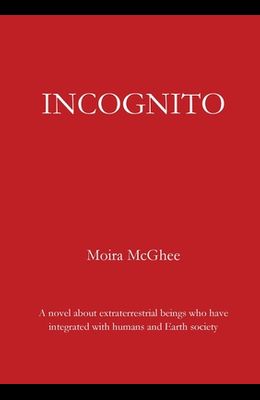 Incognito: A novel about extraterrestrial beings who have integrated with humans and Earth society

The Terrans, who look like humans, are extraterrestrials who have visited Earth, and periodically lived amongst us for thousands of years. They have come back to help us learn to care for the planet and live in a more peaceful way. They must also prevent us being infiltrated and invaded by their enemies the Xvars and Katons.

Aldon, the Commander of the covert Terran Earth Base, is assisted by androids and little grey clone 'workers'. He has Terran Agents posing on Earth in various occupations including a priest, nun, monk, vet, callgirl, scientists, and shopkeepers. As they live in society they begin to adopt some of the less admirable human traits.

There are several humans whose families have had contact with the Terrans. These people, some of whom share ancient Terran ancestors, have been augmented with additional Terran genes and have paranormal abilities. They are called prot g es and belong to 'The Friendship Club' which assists their extraterrestrial friends in their work on Earth.

Aldon is precipitated into one crisis after another as he tries to combat his troublesome agents, the sometimes confused prot g es and the military and corporations aligned with the Xvars and Katons.

Frequently Asked Questions About Incognito: A novel about extraterrestrial beings who have integrated with humans and Earth society

0
|   0  reviews
Did you read Incognito: A novel about extraterrestrial beings who have integrated with humans and Earth society? Please provide your feedback and rating to help other readers.
Write Review

List of All Editions of Incognito: A novel about extraterrestrial beings who have integrated with humans and Earth society