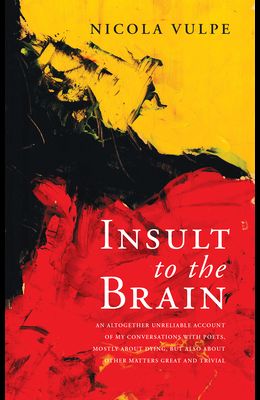 Insult to the Brain, Volume 262

Winner of the Fred Cogswell Award for Excellence in Poetry

They were shot, transported, deported. They were hanged, or they hanged themselves. They starved, or their hearts suddenly failed, or drugs or cancer consumed them. Others lived into their nineties, one even to 103. Nicola Vulpe's Insult to the Brain transports us from the gas-seeped muck of the Somme, to a tiny apartment in Buenos Aires, to an undisclosed prison yard in Iran, and a hundred times and places in between, to join some of the last century's finest poets in their final moments: horrific, tragic, ordinary, silly, absurd. Whether it is with the minimalist Gare de Rouen, 1916, dedicated to mile Verhaeren, who was accidently dropped under a train by an adoring crowd, the lament The Poet Descends, Willing the Stairs, for Forough Farrokhzad, who swerved her car into a wall to avoid a school bus, or the openly political Death and His Kin, for Tal Almallouhi, who disappeared into a Syrian prison and may or may not be dead, Vulpe writes unblinkingly with clarity, kindness--even humour-- of our common fate, and brings us closer to the fragile core of our humanity.

Frequently Asked Questions About Insult to the Brain, Volume 262

0
|   0  reviews
Did you read Insult to the Brain, Volume 262? Please provide your feedback and rating to help other readers.
Write Review

List of All Editions of Insult to the Brain, Volume 262