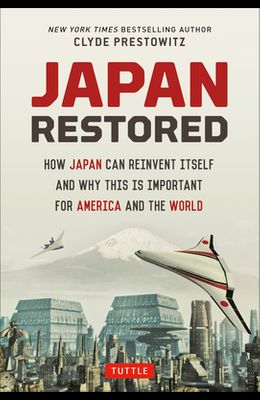 Japan Restored: How Japan Can Reinvent Itself and Why This Is Important for America and the World

How Japan Can Reinvent Itself and Why This Is Important for America and the World.

In 1979, the book Japan as Number One: Lessons for America by Harvard University professor Ezra Vogel caused a sensation in the United States by pointing out that Japan was surpassing America as world economic leader; the book remains to this day the all-time bestseller in Japan of non-fiction by a Western author. The book was timely: Japan's subsequent bubble era of the 1980s saw the country booming. But since the economic bubble burst at the start of the 1990s, Japan has been in decline. Japan Restored by Clyde Prestowitz, taking up Vogel's baton, is written as a vision of Japan in the year 2050 when the country's economic recovery has made it a world leader in every area of human endeavor. Prestowitz looks back to the present year as such a low point for Japan that a special reform commission was set up that helped the country regain its former position as a leader in technology, in business, and geopolitically. Looking at education, innovation, the role of women, corporate organization, energy, infrastructure, domestic government, and international alliances Prestowitz draws up a fascinating and controversial blueprint for the future success of Japan. As the eyes of the world turn towards Japan in the run-up to the 2020 Olympics, Japan Restored is as timely as the 1979 Vogel book that inspired it.

Frequently Asked Questions About Japan Restored: How Japan Can Reinvent Itself and Why This Is Important for America and the World

0
|   0  reviews
Did you read Japan Restored: How Japan Can Reinvent Itself and Why This Is Important for America and the World? Please provide your feedback and rating to help other readers.
Write Review

List of All Editions of Japan Restored: How Japan Can Reinvent Itself and Why This Is Important for America and the World