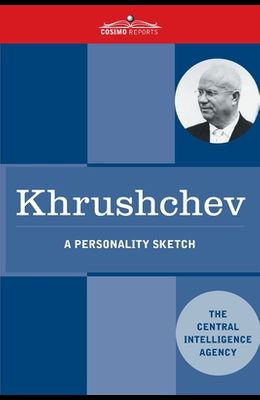 by
Central I Agency
$14.49
Select Format

.behind the exterior (of Krushchev) lay a shrewd native intelligence, an agile mind, drive, ambition, and ruthlessness. --From Krushchev--A Personality Sketch, 1961

Khrushchev--A Personality Sketch (1961), is a psychoanalytical profile of Soviet statesman Khrushchev by the CIA on the request of President John F. Kennedy as preparation for his 1961 Vienna Summit with Khrushchev. In this profile of Khrushchev--who had succeeded Joseph Stalin in 1953 as the First Secretary of the Communist Party of the Soviet Union--he is described as a person with little capacity for detecting nuances and subtleties. He is a man of action and decision when he can see issues clearly, as black or white, but becomes confused and hostile when confronted by shades of grey.

Nikita Khrushchev (1894-1971) was responsible for the de-Stalinization of the Soviet Union, for backing the early Soviet space program, and for a foreign policy of peaceful coexistence with the West. The aftermath of the Cuban missile crisis and the Sino-Soviet split, however, caused a coup against Khrushchev, who retired from power in 1964.

This psychological profile of Khrushchev is one of many prepared by the CIA of foreign leaders, such as Adolf Hitler, and Chinese leaders Zhou Enlai and Deng Xiaoping (also available from Cosimo Classics).

0
|   0  reviews
Did you read Khrushchev: A Personality Sketch? Please provide your feedback and rating to help other readers.
Write Review

List of All Editions of Khrushchev: A Personality Sketch