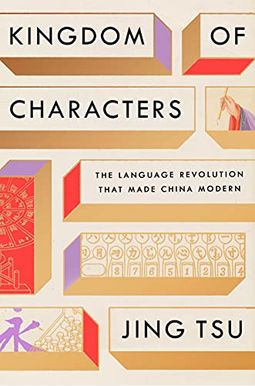 Kingdom of Characters: The Language Revolution That Made China Modern

What does it take to reinvent a language?

After a meteoric rise, China today is one of the world's most powerful nations. Just a century ago, it was a crumbling empire with literacy reserved for the elite few, as the world underwent a massive technological transformation that threatened to leave them behind. In Kingdom of Characters, Jing Tsu argues that China's most daunting challenge was a linguistic one: the century-long fight to make the formidable Chinese language accessible to the modern world of global trade and digital technology. Kingdom of Characters follows the bold innovators who adapted the Chinese language to a world designed for the Roman alphabet and requiring standardization, from an exiled reformer who risked a death sentence to advocate for Mandarin as a national language to the imprisoned computer engineer who devised input codes for Chinese characters on the lid of a teacup. Without their advances, China might never have become the dominating force we know today. With larger-than-life characters and an unexpected perspective on the major events of China's tumultuous twentieth century, Tsu reveals how language is both a technology to be perfected and a subtle, yet potent, power to be exercised and expanded.

Frequently Asked Questions About Kingdom of Characters: The Language Revolution That Made China Modern

5
|   6  reviews
Did you read Kingdom of Characters: The Language Revolution That Made China Modern? Please provide your feedback and rating to help other readers.
Write Review
1

List of All Editions of Kingdom of Characters: The Language Revolution That Made China Modern