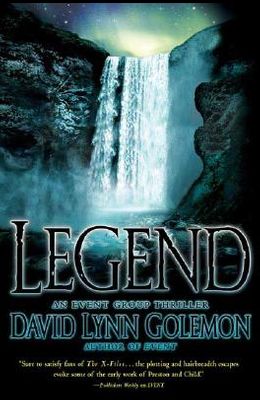 A river of no return. A treasure to die for

The Event Group is comprised of the nation's most brilliant men and women in the fields of science, philosophy, and the military. Led by Major Jack Collins, their job is to find the truth behind the world's greatest unsolved myths. And this time, Collins and his crew will dare to uncover a terrifying secret about the long-vanished tribe of the Incas that's buried deep within the Amazon Basin.

Some secrets go to the grave. Others become Legend

The last expedition into the depths and darkness of the Amazon claimed the lives of a female professor and her team. Now the Event Group, using cutting-edge technology exclusively designed by the U.S. military, will travel to the ends of the earth from Brazil to the Little Bighorn to the Arlington National Cemetery to bring new meaning to an ancient disaster or bury the legend forever or die trying.

Sure to satisfy fans of The X-Files. Publishers Weekly on EVENT

A tale worthy of the giants of the genre like Clive Cussler, James Rollins, and Matthew Reilly, Legend is a definite must-read for action and adventure fans. Don't miss it. Megalith.com

What should you read after Legend Book? Here is a list of books to read if you read and loved Legend

0
|   0  reviews
Did you read Legend? Please provide your feedback and rating to help other readers.
Write Review