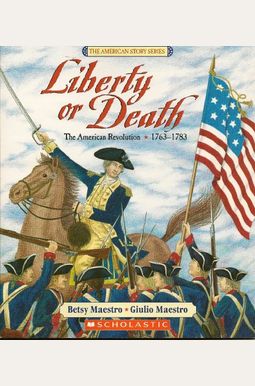 Book #5 in the The American Story Series
by
Giulio Maestro
$4.88
Select Format

It began in Boston, with angry colonists objecting to the tyranny of a king who ruled from an ocean away.

It was voiced by patriots such as Sam Adams and Patrick Henry and echoed by citizens from New England all the way to the Carolinas.

It was fought by many -- colonists and patriots, Loyalists and slaves, Frontiersmen and Indians, British and French soldiers.

Over more than ten years, sides were taken, guns drawn, lives lost. But through it all, one man -- a general from Virginia named George Washington -- held the young colonies together and led them to victory, beating almost impossible odds.

History lovers Betsy and Giulio Maestro tell this true story of extraordinary times, incredible drama, and the birth of a new nation.

Frequently Asked Questions About Liberty Or Death: The American Revolution: 1763-1783

The American Story Series In Order - By Giulio Maestro

0
|   0  reviews
Did you read Liberty Or Death: The American Revolution: 1763-1783? Please provide your feedback and rating to help other readers.
Write Review

List of All Editions of Liberty Or Death: The American Revolution: 1763-1783