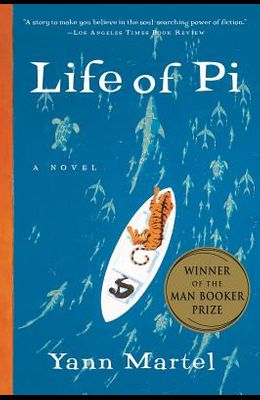 NATIONAL BESTSELER
A NEW YORK TIMES NOTABLE BOK of 2002
Pi Patel, a God-loving boy and the son of a zookeeper, has a fervent love of stories and practices not only his native Hinduism, but also Christianity and Islam. When Pi is sixteen, his family and their zoo animals emigrate from India to North America aboard a Japanese cargo ship. Alas, the ship sinks -- and Pi finds himself in a lifeboat, his only companions a hyena, an orangutan, a wounded zebra, and a 450-pound Bengal tiger. Soon the tiger has dispatched all but Pi. Can Pi and the tiger find their way to land? Can Pi's fear, knowledge, and cunning keep him alive until they do?
An impassioned defense of zoos, a death-defying trans-Pacific sea adventure a la Kon-Tiki, and hilarious . . .: This audacious novel manages to be all of these. -- The New Yorker
Life of Pi could renew your faith in the ability of novelists to invest even the most outrageous scenario with plausible life. -- The New York Times Book Review
Life of Pi is a real adventure: brutal, tender, expressive, dramatic, and disarmingly funny. . . . It's difficult to stop reading when the pages run out. -- San Francisco Chronicle
Yann Martel was born in Spain in 1963 of Canadian parents. He grew up in Costa Rica, France, Mexico and Canada, and has traveled extensively on his own. After studying philosophy at university, he worked variously as a dishwasher, tree planter and security guard. Then he began to write. When he's not living somewhere else, he lives in Montreal.

What should you read after Life of Pi Book? Here is a list of books to read if you read and loved Life of Pi

0
|   0  reviews
Did you read Life of Pi? Please provide your feedback and rating to help other readers.
Write Review