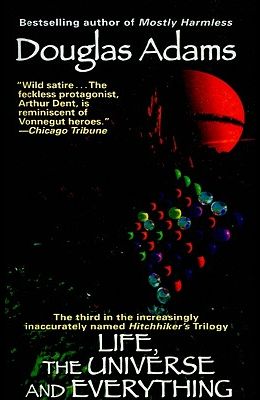 Life, the Universe, and Everything

Book #3 in the The Hitchhiker's Guide to the Galaxy Series
by
Douglas Adams
$18.63
Select Format

Now celebrating the 42nd anniversary of The Hitchhiker's Guide to the Galaxy, soon to be a Hulu original series

Wild satire . . . The feckless protagonist, Arthur Dent, is reminiscent of Vonnegut heroes.--Chicago Tribune The unhappy inhabitants of planet Krikkit are sick of looking at the night sky above their heads--so they plan to destroy it. The universe, that is. Now only five individuals stand between the killer robots of Krikkit and their goal of total annihilation. They are Arthur Dent, a mild-mannered space and time traveler who tries to learn how to fly by throwing himself at the ground and missing; Ford Prefect, his best friend, who decides to go insane to see if he likes it; Slartibartfast, the indomitable vice president of the Campaign for Real Time, who travels in a ship powered by irrational behavior; Zaphod Beeblebrox, the two-headed, three-armed ex-president of the galaxy; and Trillian, the sexy space cadet who is torn between a persistent Thunder God and a very depressed Beeblebrox. How will it all end? Will it end? Only this stalwart crew knows as they try to avert universal Armageddon and save life as we know it--and don't know it Adams is one of those rare treasures: an author who, one senses, has as much fun writing as one has reading.--Arizona Daily Star

Frequently Asked Questions About Life, the Universe, and Everything

0
|   0  reviews
Did you read Life, the Universe, and Everything? Please provide your feedback and rating to help other readers.
Write Review

List of All Editions of Life, the Universe, and Everything