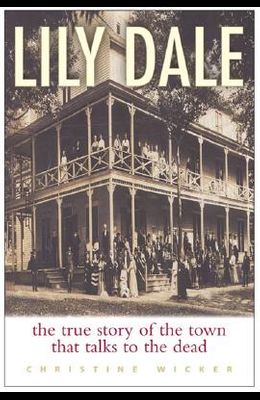 Lily Dale: The True Story of the Town That Talks to the Dead

Instead, spirits flit among the elms and stroll along the streets, sometimes dressed in garb more common 120 years ago, when Lily Dale was founded and suffragette Susan B. Anthony was a frequent guest.

According to Spiritualists who have ruled this Victorian hamlet for five generations, the dead don't go away and they stay anything but quiet. Every summer twenty thousand guests come to consult the town's mediums, who can hang out a shingle only after passing a test that confirms their connection to the spirit world.

On the hot June day when reporter Christine Wicker comes to the world's oldest and largest Spiritualist community, she is determined to understand the secret forces -- human or otherwise -- that keep Lily Dale alive. She follows three visitors: a newly bereaved widow; a mother whose son killed himself; and a beautiful, happily married wife whose first visit to Lily Dale brings an ominous warning.

Are the mediums cold-hearted charlatans, as Sinclair Lewis wrote of them? Or are they conduits for a hidden world that longs to bring peace and healing to the living, as psychologist William James and muckraker Upton Sinclair once hoped to prove?

Investigating a movement that attracted millions of Americans in the 1800s and now barely survives, Wicker moves beyond the mediums' front parlors and into the lives that tourists never see. She follows the mediums to a place where what we know and how we know it is the greatest mystery of all.

Frequently Asked Questions About Lily Dale: The True Story of the Town That Talks to the Dead

0
|   0  reviews
Did you read Lily Dale: The True Story of the Town That Talks to the Dead? Please provide your feedback and rating to help other readers.
Write Review

List of All Editions of Lily Dale: The True Story of the Town That Talks to the Dead