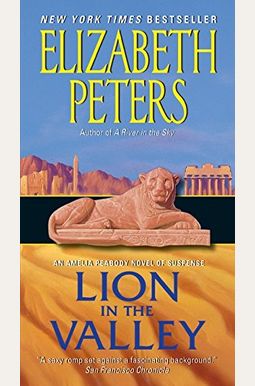 Lion In The Valley (An Amelia Peabody Mystery)(Library Edition)

The 1895-96 season promises to be an exceptional one for Amelia Peabody, her dashing Egyptologist husband, Radcliffe Emerson, and their precocious (some might say rambunctious) eight-year-old son, Ramses. The long-denied permission to dig at the pyramids of Dahshoor has finally been granted, and the much-coveted burial chamber of the Black Pyramid is now theirs for the exploring.

Before the young family exchanges the relative comfort of Cairo for the more rudimentary quarters near the excavation site, they engage a young Englishman, Donald Fraser, as a tutor and companion for Ramses, and Amelia takes a wayward young woman, Enid Debenham, under her protective wing.

But there is danger and deception in the wind that blows across the hot Egyptian sands. A brazen kidnapping attempt, a gruesome murder, and an expedition subsequently cursed by misfortune and death--all serve to alert Amelia to the likely presence of her arch nemesis, the Master Criminal, notorious looter of the living and the dead. But it is far more than ill-gotten riches that motivate the man known as Sethos. The evil genius has a score to settle with the meddling lady archaeologist who has sworn to deliver him to justice . . . and he's got her dead-on in his sights.

Replete with edge-of-the-seat suspense and scrupulous archaeological and historical detail, all delivered in Amelia Peabody's unique, wry voice, Lion in the Valley is a classic installment in Elizabeth Peters's beloved mystery-adventure series.

0
|   0  reviews
Did you read Lion In The Valley (An Amelia Peabody Mystery)(Library Edition)? Please provide your feedback and rating to help other readers.
Write Review