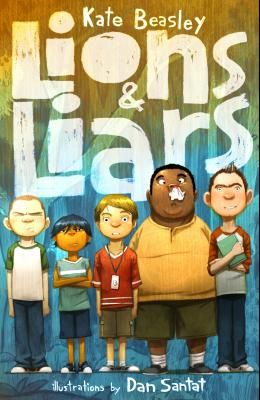 Frederick Frederickson has a food-chain theory about life. There are lions, like the school bully. Gazelles, like the bullied kids. There are meerkats, and the fleas that live on the butts of meerkats. Frederick's a flea. Fifth grade is off to a terrible start when Frederick is sent to a disciplinary camp for troublesome boys. His fellow troop mates--Nosebleed, Specs, The Professor, and little-yet-lethal Ant Bite--are terrifying. But in between trust-building exercises and midnight escape attempts, a tenuous friendship grows between them. Which is lucky, because a Category 5 hurricane is coming and everyone will have to work together--lions and fleas alike--to survive Kate Beasley outdoes herself in this hilarious, whip-smart tale of brotherhood, survival, and what it really means to be a friend. Praise for Lions & Liars: Beasley follows her acclaimed debut, Gertie's Leap to Greatness (2016), with a winning story that matches earnestness with humor. . .transformative read. --Booklist, starred review

Beasley's sophomore novel. . .is chock full of zany, nicknamed characters (Frederick shares a cabin with Nosebleed, Ant Bite, Specs, and the Professor) coming together in a story of friendship among boys. . .A fun coming-of-age romp. --Kirkus Reviews

0
|   0  reviews
Did you read Lions & Liars? Please provide your feedback and rating to help other readers.
Write Review