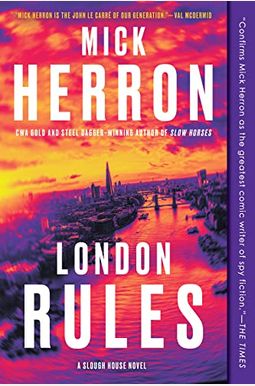 Mick Herron is the John le Carr of our generation. --Val McDermid At MI5 headquarters Regent's Park, First Desk Claude Whelan is learning this the hard way. Tasked with protecting a beleaguered prime minister, he's facing attack from all directions: from the showboating MP who orchestrated the Brexit vote, and now has his sights set on Number Ten; from the showboat's wife, a tabloid columnist, who's crucifying Whelan in print; from the PM's favorite Muslim, who's about to be elected mayor of the West Midlands, despite the dark secret he's hiding; and especially from his own deputy, Lady Di Taverner, who's alert for Claude's every stumble. Meanwhile, the country's being rocked by an apparently random string of terror attacks. Over at Slough House, the MI5 satellite office for outcast and demoted spies, the agents are struggling with personal problems: repressed grief, various addictions, retail paralysis, and the nagging suspicion that their newest colleague is a psychopath. Plus someone is trying to kill Roddy Ho. But collectively, they're about to rediscover their greatest strength--that of making a bad situation much, much worse. It's a good thing Jackson Lamb knows the rules. Because those things aren't going to break themselves.

0
|   0  reviews
Did you read London Rules (Slough House)? Please provide your feedback and rating to help other readers.
Write Review

List of All Editions of London Rules (Slough House)