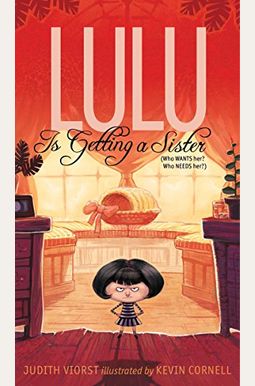 Lulu Is Getting A Sister: (Who Wants Her? Who Needs Her?) (The Lulu Series)

Book #4 in the Lulu Series
by
Judith Viorst and Kevin Cornell
$8.79
Select Format

Lulu is getting the sister she never asked for in this hilarious illustrated chapter book filled with hilarious hijinks and fiesty twists from Judith Viorst.

Lulu has received the worst. News. EVER. She's getting.a baby sister. No one ever asked HER opinion on this debacle. But she'll tell you anyway, because she no how, no way, no thank you wants a sibling. Undeterred, and to prepare Lulu for big sisterhood, her parents bribe--AHEM, ask--Lulu to attend Camp Sisterhood, a.k.a. big sister training camp. As a Sister-in-Training (SIT), Lulu is assigned a variety of temporary little siblings who are supposed to be so much fun Lulu will become excited to have a permanent sibling of her own. Well, no one ever said Camp Sisterhood was supposed to teach Lulu how to be a good big sister, so Lulu resolves to be a bad big sister. She insults her little siblings. She taunts them with secrets. She even tricks one of them into carrying both of their backpacks up a mountain But no matter what Lulu does, she can't shake the little terrors. Then some BITs (brothers-in-training) from the neighboring Camp Brotherhood start picking on Lulu's siblings, and Lulu responds by doing her red-faced, steam-coming-out-of-her-ears thing and showing those BITs who's boss After all, Lulu's siblings may be duds, but they're her duds, and sisters have to stick together. Besides, in the end, Lulu figures that having a little sister probably won't be as bad as a getting a tooth pulled. Probably.

Frequently Asked Questions About Lulu Is Getting A Sister: (Who Wants Her? Who Needs Her?) (The Lulu Series)

Books like Lulu Is Getting A Sister: (Who Wants Her? Who Needs Her?) (The Lulu Series)

0
|   0  reviews
Did you read Lulu Is Getting A Sister: (Who Wants Her? Who Needs Her?) (The Lulu Series)? Please provide your feedback and rating to help other readers.
Write Review

List of All Editions of Lulu Is Getting A Sister: (Who Wants Her? Who Needs Her?) (The Lulu Series)