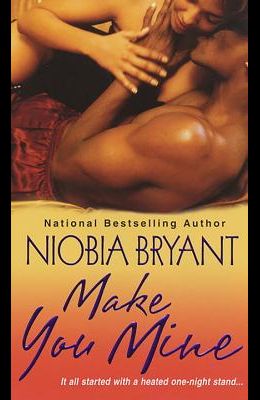 Three months after a first date that ended in a night of explosive passion, Caress Coleman and Julius Jones find themselves somewhere between roommates with benefits and true love. She's smart, beautiful, and one paycheck away from broke. He's smart, handsome, and very successful. But that's just the beginning of their differences. . . She's messy--and that's putting it nicely.
He's a neat freak--and that's an understatement. She's happy in sweatpants.
He's an urban sophisticate who wears the hippest designer labels. They're total opposites in every way but one: they share a sizzling attraction that makes them want to beg for more and more. But can their passion lead to a love that lasts for the long haul? Raves for Niobia Bryant Hot men, spicy women and a sexually captivating story. --Romantic Times on Hot like Fire

Frequently Asked Questions About Make You Mine

0
|   0  reviews
Did you read Make You Mine? Please provide your feedback and rating to help other readers.
Write Review