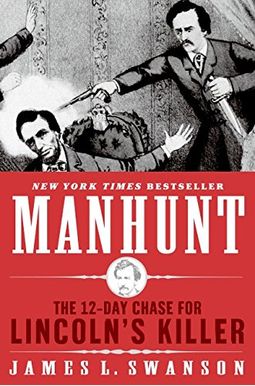 The murder of Abraham Lincoln set off one of the greatest manhunts in American history -- the pursuit and capture of John Wilkes Booth. James Swanson's Manhunt describes the hour-by-hour details of the twelve days after Abraham Lincoln's assassination as authorities hunted for his killer.

Drawing on rare archival materials and trial transcripts, Swanson tells the story through the eyes of both hunter and hunted, creating a page-turning adventure that is as riveting as it is real. The first book devoted entirely to the dramatic days between the murder of the president and the capture and death of his killer, Manhunt is a fascinating tale of murder, intrigue, and betrayal. James L. Swanson, an author and attorney, was born on Lincoln's birthday and has studied and collected books, documents, art and artifacts connected with Abraham Lincoln's life and death since he was ten years old. At the Cato Institute, he is a senior fellow in Constitutional studies and editor in chief of the Cato Supreme Court Review. He has written for the Chicago Tribune Sunday Magazine, George, Playboy, American Heritage and other publications, and is the co-author of Lincoln's Assassins, a coffee-table book on the president's assassination. Swanson has written a terrific narrative . that will mesmerize the reader from start to finish just as the actual manhunt mesmerized the entire nation. It is a triumphant book.-- Doris Kearns Goodwin

0
|   0  reviews
Did you read Manhunt? Please provide your feedback and rating to help other readers.
Write Review