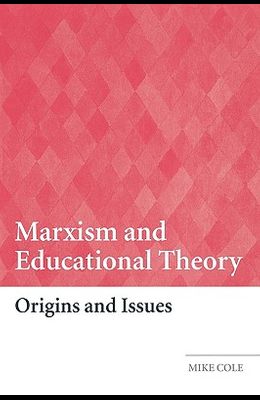 We live in a world where thousands make massive profits out of the labours of others, while those others exist as wage slaves, millions of whom die of starvation and poverty-related illness every year. The fundamental aim of Marxism is the overthrow of the anarchic, exploitative and eco-destructive system of world capitalism and its replacement by world socialism and equality. To build a socialist world is a task of gargantuan proportions, but one that Marxists believe is eminently achievable.

This book addresses some of these challenges from within educational theory. The key theoretical issues addressed are:

Marxism and Educational Theory compellingly and informatively propels the debate forward in the pursuit of that socialist future. In that quest, suggestions are made to connect theoretical issues with the more practical concerns of the school and the classroom.

With a specially written Foreword by Peter McLaren, this timely book will be of interest to academics and students interested in educational theory, the sociology of education, sociology, politics, philosophy and critical theory.

0
|   0  reviews
Did you read Marxism and Educational Theory: Origins and Issues? Please provide your feedback and rating to help other readers.
Write Review

List of All Editions of Marxism and Educational Theory: Origins and Issues