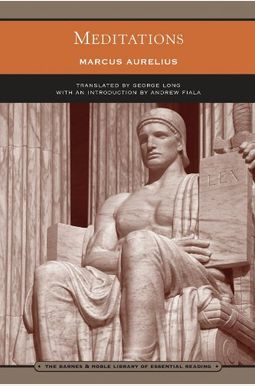 The philosophical thoughts of Emperor Marcus Aurelius are presented here in a superb reprint, brimming with the intellect and sincerity of the author.

Known for his tolerance and benevolence, Marcus Aurelius was the only Emperor to tolerate satire of his own character. As a ruler he was renowned for sound judgment, respected for both his military successes and for his wise, measured governance. Such deeds were derived from his education; a lifelong admirer of the Greek philosophers, Aurelius developed his own, unique interpretation of Stoicism which is encapsulated in this text.

Though Aurelius was the final of the 'Five Good Emperors', the precepts of his Meditations would be consulted by rulers - Roman and otherwise - for millennia to follow. While Rome experienced decline and chaos, its historians and scholars remembered Marcus Aurelius as a pinnacle of competence. A man experienced in inspiring leadership in battle, Aurelius was justly considered a fountain for sound advice: how to compose oneself and judge how to act, how to practice and lead a life of virtue and contentment, and how to treat others in an even-handed yet inspiring manner are but a few of the tenets at hand.

This edition of the Meditations features the much-respected translation by scholar of classics George Long.

0
|   0  reviews
Did you read Meditations? Please provide your feedback and rating to help other readers.
Write Review