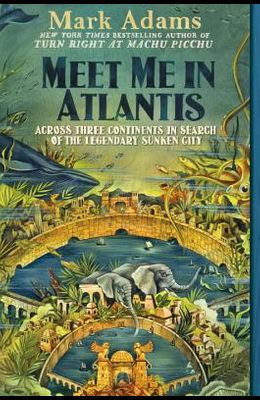 Meet Me in Atlantis: Across Three Continents in Search of the Legendary Sunken City

The author of Turn Right at Machu Picchu travels the globe in search of the world's most famous lost city. Adventurous, inquisitive and mirthful, Mark Adams gamely sifts through the eons of rumor, science, and lore to find a place that, in the end, seems startlingly real indeed.--Hampton Sides

A few years ago, Mark Adams made a strange discovery: Far from alien conspiracy theories and other pop culture myths, everything we know about the legendary lost city of Atlantis comes from the work of one man, the Greek philosopher Plato. Stranger still: Adams learned there is an entire global sub-culture of amateur explorers who are still actively and obsessively searching for this sunken city, based entirely on Plato's detailed clues. What Adams didn't realize was that Atlantis is kind of like a virus--and he'd been exposed. In Meet Me in Atlantis, Adams racks up frequent-flier miles tracking down these Atlantis obsessives, trying to determine why they believe it's possible to find the world's most famous lost city--and whether any of their theories could prove or disprove its existence. The result is a classic quest that takes readers to fascinating locations to meet irresistible characters; and a deep, often humorous look at the human longing to rediscover a lost world.

Frequently Asked Questions About Meet Me in Atlantis: Across Three Continents in Search of the Legendary Sunken City

0
|   0  reviews
Did you read Meet Me in Atlantis: Across Three Continents in Search of the Legendary Sunken City? Please provide your feedback and rating to help other readers.
Write Review

List of All Editions of Meet Me in Atlantis: Across Three Continents in Search of the Legendary Sunken City