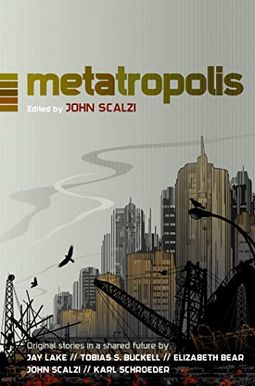 More than an anthology, Metatropolis is the brainchild of five of science fiction's hottest writers--Elizabeth Bear, Tobias Buckell, Jay Lake, Karl Schroeder, and project editor John Scalzi---who combined their talents to build a new urban future, and then wrote their own stories in this collectively-constructed world. The results are individual glimpses of a shared vision, and a reading experience unlike any you've had before.

A strange man comes to an even stranger encampment.a bouncer becomes the linchpin of an unexpected urban movement.a courier on the run has to decide who to trust in a dangerous city.a slacker in a zero-footprint town gets a most unusual new job.and a weapons investigator uses his skills to discover a metropolis hidden right in front of his eyes.

Welcome to the future of cities. Welcome to Metatropolis.

0
|   0  reviews
Did you read Metatropolis: Original Science Fiction Stories in a Shared Future? Please provide your feedback and rating to help other readers.
Write Review

List of All Editions of Metatropolis: Original Science Fiction Stories in a Shared Future