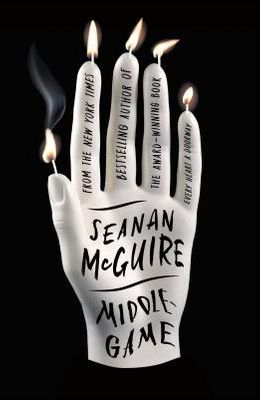 Book #1 in the Middlegame Series
by
Seanan Mcguire
$29.99
Select Format

WINER OF THE LOCUS AWARD FOR BEST FANTASY NOVEL, 2020

A Pick on the 2020 RUSA Reading List New York Times bestselling and Alex, Nebula, and Hugo-Award-winning author Seanan McGuire introduces readers to a world of amoral alchemy, shadowy organizations, and impossible cities in the standalone fantasy, Middlegame. Meet Roger. Skilled with words, languages come easily to him. He instinctively understands how the world works through the power of story. Meet Dodger, his twin. Numbers are her world, her obsession, her everything. All she understands, she does so through the power of math. Roger and Dodger aren't exactly human, though they don't realise it. They aren't exactly gods, either. Not entirely. Not yet. Meet Reed, skilled in the alchemical arts like his progenitor before him. Reed created Dodger and her brother. He's not their father. Not quite. But he has a plan: to raise the twins to the highest power, to ascend with them and claim their authority as his own. Godhood is attainable. Pray it isn't attained. A USA Today Bestseller, and named as one of Paste Magazine's 30 Best Fantasy Novels of the Decade

0
|   0  reviews
Did you read Middlegame? Please provide your feedback and rating to help other readers.
Write Review